149,151,264 records
This is a collection of church burials and civil deaths recorded in France. The indexed records contain the name of the deceased, their death date, and death place. Additional details can often be found on each record’s associated image including information about the deceased’s birth date and place, marital status (widowhood, divorced), residential address, parents’ names, or the name of their spouse(s) and sometimes death of the spouse(s). Deaths were usually recorded within a day or two of the passing in the same commune where the person died.

Typically, these records will have two witnesses or informants, and often one of them is a close relative of the decedent. A soldier who died away from home can also be found in these records in the town where the soldier was born but it is common that such a record may not have been entered until a year or two after the soldier’s death. If a child was stillborn the child’s information will be contained in the death records in the commune where the stillbirth occurred.

Few parish registers from before the mid-1600s have survived and coverage and completeness of this collection varies by department and records prior to 1700 are rare in this collection. 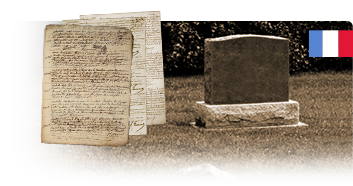