4,495,296 records
This collection consists of index cards from the British Army Medal Office for service medals and other awards to be issued following the First World War. Records include the first and last name of the service person. They may also include: corp, regiment number, rank, and years of service of the individual.

The content in this collection originates from The National Archives and contains public sector information licensed under the Open Government Licence v3.0. 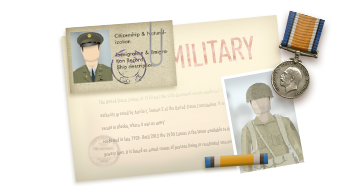